Reality Measurements Inc. uses a variety of apparatus for low altitude photogrammetry including a remote controlled helicopter, blimp or kite.

Blimp / Kite Aerial photogrammetry can be used to quickly obtain aerial observations of crime and accident scenes at low altitudes. Accurate non-contact 3D measurements of the scene can be easily obtained by incorporating state-of-the-art digital photogrammetry software. Accurate ground scales can be determined using targets on the ground and a Total Station for high precision measurements or measurement tapes where lower precision results are acceptable.

All important dimensional aspects of the crime or crash scene can be quickly captured. The scenes are frozen in time. Accurate X, Y and Z co-ordinates of the important locations of the crime and crash scenes can be retrieved at any time. The data can be transferred to diagramming and rendering software at any time.

The following are typical high quality aerial digital pictures that have been obtained with the use of a blimp. 3D measurements can be obtained from digital photos like these.

Often there is a requirement to obtain one composite picture of a very large area using several separate pictures. This is accomplished using special "photo-stitching" software that combines the pictures together and eliminates lens distortion effects. The following composite aerial digital picture obtained from a blimp shows an example of a sophisticated "photo-stitched" large scene processed picture (note the gray corner areas due to the necessary angular adjustments of the "photo-stitched pictures").

The benefits of aerial digital photogrammetry using a blimp are:

Photogrammetry is the science of geometry, mathematics and physics that uses the 2-dimensional image of a 3 dimensional scene to reconstruct a reliable and accurate model of the original 3D scene. The principles of photogrammetry have been well established and used throughout the century. However, with the recent advent of professional quality digital cameras and the emergence of suitable portable camera lifting platforms, high quality and more precise 3D information can now be obtained much easier and at a very affordable cost.

Picture 1, below, shows the typical photo-taking process. Photographs are normally taken so that there is an overlap of about 60% between consecutive photos. The photogrammetric process entails the use of at least two photographs to derive three-dimensional information. The 60% overlap region would be the region that produces the data. In order to put different flight-lines together a least a 15% overlap must exist between them. 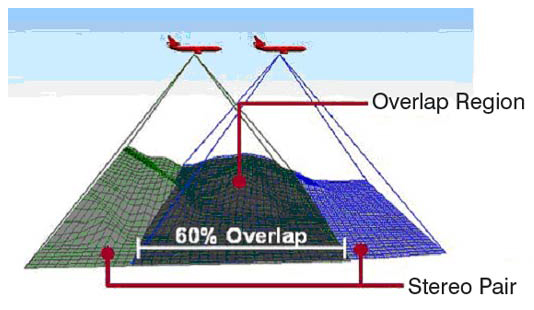 Information about the camera is critical in the process of aerial photographs. Therefore, identifiable points on the ground (ground control points) are used to determine distances and geometric properties of the image, including camera height above the ground, degree of tilt at the time the photo was taken, distance between photo centers, and to correct for distortions on the image. These control points are three-dimensional in nature so a three-dimensional relationship will be formed between the picture and the ground.

Photogrammetric cameras are precisely calibrated to determine their photogrammetric properties. The camera manufacturers generally give camera parameters such as the focal length. This focal length usually given by a camera system is generally rough and must be calibrated to determine it precisely. If the camera is properly calibrated any aerial pair of photographs, with the correct overlap can be used to give three-dimensional information. Picture 1 represents the way aerial photographs are generally taken – that is, using large aircrafts to fly at high altitudes and to take the necessary pictures. Such a scenario occurs in the mapping industry where large areas need to be mapped. This is not necessary for smaller projects such as gravel, chip, coal, etc. pile volume calculations. Picture 2, below, shows a picture of the RC helicopter. The camera system is lifted by the RC helicopter and controlled remotely via radio link. Elevations exceeding 1000 feet can easily be achieved. 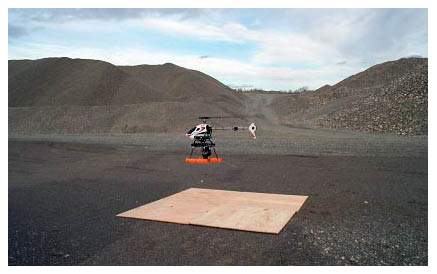 Digital photogrammetry is a very cost-effective way to obtain accurate information for areas inaccessible to ground-based survey crews. No actual physical measurements are made of the specific ground features, except for control points established for the photogrammetric processing. However, a 3-dimensional model, from photographs taken at a sufficient altitude above the ground, can be created. From this model, distances between objects or differences in heights can be accurately measured. Photogrammetric surveys can be horizontal, vertical or both. They can be used for:

Volumetric surveys are normally carried out after the creation of a DEM from the photogrammetric model. A DEM is a Digital Elevation Model. Top photogrammetric modeling software is able to extract elevations at a certain interval on overlapping photographs. The software does this by matching pixel values between the stereo pairs. The resulting DEM is a file loaded with spot elevations and the horizontal coordinates for those points. These points can be used to create mesh surfaces for volume calculations or contour maps. The following figures show a picture of a pile and its DEM volume model.

Picture 4, above, represents a pile that was measured using aerial photogrammetry techniques by Reality Measurements Inc. The image is a picture of the mesh formed from a generated DEM. From this mesh the volume was calculated.

Picture 5 displays the volume vectors formed, at a regular grid interval, in order to calculate the volume. The vectors are normal to a reference plane at the base of the pile and up to the mesh surface. 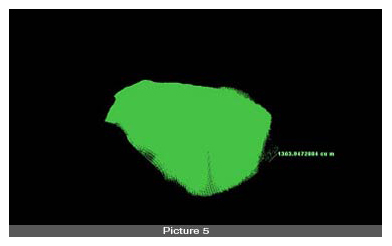